NSW 18ft Skiff Championship Back on the Harbour this Sunday 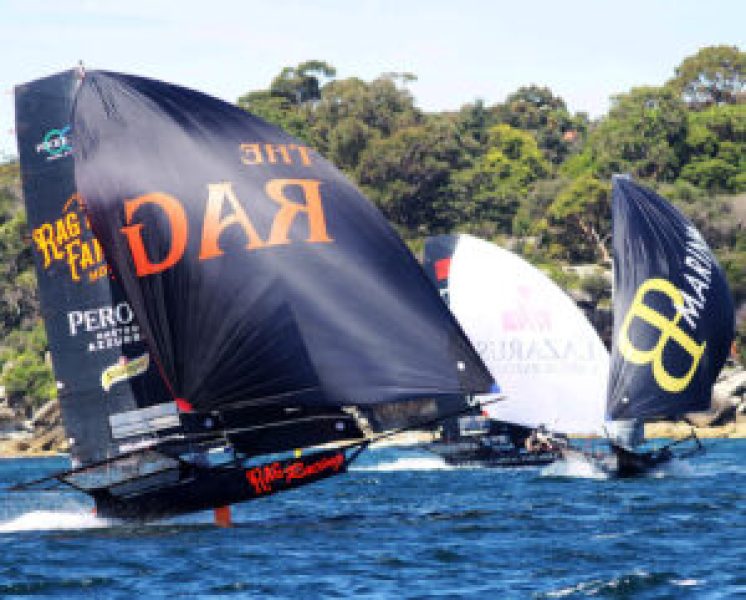 The incredible story of John ‘Woody’ Winning and his son John ‘Herman’ Winning Jr. continues on Sydney Harbour this Sunday when the two skippers lead their teams in the quest to win the 2022-23 NSW 18ft Skiff Championship.

‘Herman’ (Andoo) with two wins from the three races sailed so far holds a narrow lead over ‘Woody’ (Yandoo), whose team has had best results of one win and a second placing.

With just two races still to be sailed, on January 15 and 22, and each team allowed to discard its worst race placing from the five-race championship, Sunday’s result will be critical towards the overall winner.

That a father and son are competing against each other at the top of the points table in such a demanding, high speed class as the 18 footers is rare, but their story has an even greater twist.

Only two weeks ago ‘Herman’ and ‘Woody’, together with Andoo’s two other 18ft skiff crew members, Seve Jarvin and Sam Newton, raced together on AndooComanche and took Line Honours in the Rolex Sydney Hobart Yacht Race 2022.

The 70-year-old ‘Woody’ was obviously thrilled to be part of AndooComanche’s Line Honours victory with his son, but is a real pro when it comes to competing in the 18s.

He quickly reminds everyone, “We are in the middle of a major 18 footer championship and my focus is entirely on trying to beat every other team in the event.”

“I’m sure every other team has the same attitude and I can’t be thinking about friendships or past teammates.”

While the strong Andoo team retains favouritism to take the NSW Championship, Yandoo’s boat speed has been impressive and the team work faultless under pressure.

The early weather forecast indicates similar conditions to those in Races 2 and 3 which produced such a close contest between Andoo and Yandoo.

The battle behind the two leaders is also tight and a good result on Sunday is essential to retain any hope of a top finish overall after the last race of the championship on January 22.

Adding another dimension to the contest is the ongoing improvement of new boats Rag & Famish Hotel and Balmain Slake, the introduction of the new Finport Finance (Keagan York) and the return from New Zealand of Sean Langman’s Noakesailing.

Spectators can follow the action on board the club’s spectator ferry, as they have done for the past 87 years, which leaves Double Bay Wharf alongside the clubhouse at 2pm.

Booking online through the club’s website www.18footers.flywheelstaging.com is essential at,

For anyone who can’t make it out onto the water, the League’s live broadcast team will be out on Sydney Harbour to capture all the action.  Live streaming is available at www.18footers.flywheelstaging.com by clicking on the ’18 Footers TV’ link.

For all the club’s racing and up-to-date news: