HUGH STODART – High achiever in an era of champions 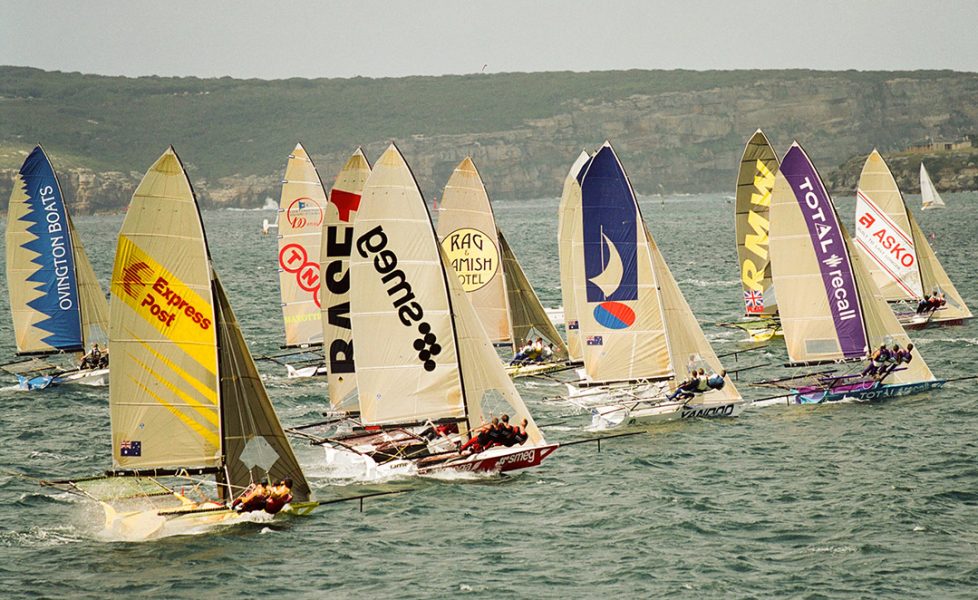 Hugh Stodart is one of those champion 18 footer skippers whose statistical record doesn’t truly reflect his talent and successes, and therefore doesn’t get the recognition that his performances in the 18s really deserves.

Like others before him, Hugh came through the class at a time of extremely talented champion opponents, such as internationals Howie Hamlin (USA) and Rob Greenhalgh (UK), as well as local champions Michael Coxon, Seve Jarvin, John Winning and John Harris, just to name a few.

Other champions of the modern era to suffer similar situations were David Porter and John ‘Woody’ Winning during the 1970s and early 1980s.

Porter won the 1975 World Championship but was runner-up five times in the ‘big one’ against many champion opponents from Australia and New Zealand, including the legendary Iain Murray.

Hugh Stodart came to the 18s in the 2000-01 season, in a skiff sponsored by Express Post, after an impressive record in both the Cherub and 5o5 classes.

Hugh was also 2000 National Teams Racing champion then joined the 18s fleet via the 49ers.

According to Hugh, “The first two seasons were a steep learning curve for our team which included Joe De Koch and Paul Schulz.  We had our good moments but lacked the consistency that comes with experience, particularly on the unique Sydney Harbour courses sailed by the 18s and were not able to finish off a race in front.”

“It is very easy to lose a lot of distance quickly and it took a while for us to reduce our mistakes to the point where we could stay with the front boats consistently.”

The third season sailing the Express Post skiff was the most successful to that point for Stodart and his team, now Paul Schulz and Niall Kinch, which finished 4th overall behind Howie Hamlin’s GE-US Challenge, Rob Greenhalgh’s RMW Marine and Tony Hannan’s Total Recall at the 2003 Giltinan World Championship.

During the regatta, Express Post scored a race win, a second place, a third, a fourth, and three seventh placings.  The impressive performance was rewarded by a move to the Asko Appliances sponsorship and a new hull for the 2003-04 season.

It was the beginning of a very consistent, high level partnership between Hugh Stodart and the Asko Appliances company, which continued over the next five seasons.

In the first season of the new partnership, only two great world champion skippers, UK’s Rob Greenhalgh and Australia’s John ‘Woody’ Winning, were able to beat the new Asko Appliances team at the 2004 JJs regatta, but even greater things were to come in the 2004-05 season.

Hugh recalls, “It was in 2004 that we introduced the square top mainsails, working with Howie Hamlin and Ullman Sails.  We also made a few other development tweaks such as a new centreboard shape.”

“Our development efforts were nothing compared to the big steps in the class history, but within the current rules, they were significant and we had a really quick boat in 8-12 knots, which made life easy at times.”

At the 2005 JJs, Asko Appliances was one of four skiffs (and the most successful) to use the square top mainsail and got to within one point of giving Hugh Stodart, Paul Schulz and Niall Kinch the title of world champions.

It was an incredibly closely-fought regatta which produced six different winners from the seven races.

After leading comfortably around every mark of the NE course in a 8-10 knot breeze to win Race 5, Asko Appliances went into the final race of the regatta trailing the series leader, Euan McNicol’s Club Marine, by five points.

The Club Marine team was forced to recover from a poor start and had to work hard, occasionally assisted by other teams’ problems, through the 28-boat fleet to finish in ninth place.

Asko Appliances would need to finish in fourth place to take the championship on a count-back.

On the beat to the finish off Double Bay, Asko Appliances was in fourth place behind RMW Marine (Rob Greenhalgh), Casio Seapathfinder (Michael Coxon) and Computer Associates (Anthony Young) and looked the likely winner.

Daniel Phillips’ Omega Smeg then gained a wind shift and 200 metres from the finish grabbed a narrow advantage over Asko to cross the finishing line 11s ahead of a luck-less Stodart and his team.

After the race, Hugh was quoted as saying, “I would have been satisfied with second place if it had not been so close.”

Adding to the Asko team’s misfortune in the overall points standing was the complicated result of an incident which occurred in Race 6.

Asko had finished ninth in the race, but retired later when Stodart was made aware that the boat had touched a mark while executing penalty turns for an infringement with another competitor.  It meant that Asko Appliances had to ‘carry’ a 10th placing from Race 3 instead of, what would have been, a 9th place in Race 6.

The difference, a championship victory for Stodart and Asko Appliances.

The pain of losing the 2005 JJ Giltinan World Championship by a single point was eased a little when the Asko Appliances team finally broke through to win its first major 18 footer title when it took out the 2005-06 Australian Championship, on Sydney Harbour.

According to Hugh. “It was nice to win and get on the trophy but it was never the main goal.  We had good speed in the right conditions and won with a heat to spare.”

Then at the 2006 Giltinan Championship, Hugh recalls, “2nd again!  We were pretty quick that year and were consistent for once.”

“Working with Bruce Hollis, from Ullman Sails, and Howie Hamlin, we had refined the square top mains and got them working pretty well in all conditions.  We also used a shute from Alexander Sails which was super quick in moderate airs.”

“We won a couple of races and in the end it came down to the last race with a three way winner-takes-all battle with Euan McNicol and Michael Coxon.”

“We weren’t able to execute as well as Michael Coxon, so were once again the bridesmaid.”

The Asko Appliances team’s performance, when finishing fourth at the 2007 JJs, was described in the media as “patchy and luckless” while Stodart commented that a last race incident “pretty much sums up our season”.

The incident he referred to certainly was spectacular.

Following a race-long battle with Seve Jarvin’s Gotta Love It 7 in the final race of the 2007 championship regatta, Asko Appliances’ crew misjudged the distance it needed to safely clear a projecting rock shelf on the spinnaker run from Clark Island to Obelisk Bay and hit the rocks at around 20 knots in the 18 knot SSE breeze.

The boat stopped ‘dead’ and the crew were catapulted around the forestay.  The fin snapped off and the boat capsized

2007-08 was the Asko Appliances team’s last full season together.  The 2008 Giltinan Championship was consistent with five of the seven races resulting in top-four placings, but without a race victory, and the overall result was third – without threatening the top two teams.

Hugh retired at the end of the 2007-08 season but was recruited by Smeg’s skipper Daniel Phillips to take over as skipper for the 2009 Giltinan Championship when sheet hand Greg Dixon was unable to sail because of injury.

Daniel Phillips moved onto the sheet and the team won the first race of the regatta by 31s, in an 8-10 knot Easterly breeze.  It was the only moment of glory and the team could finish no higher than 5th in any race and were placed 8th overall in the championship.

Hugh Stodart competed at the top end of the Australian 18 Footers League fleet from 2001 to 2009.

Hopefully, the 18s will see the Stodart name appear again at the League as Hugh’s sons, Sam and Jamie are presently moving through the Flying 11 and 29er classes.

For Hugh, he says, “With the kids now more independent and my memory and body failing, I perhaps unwisely, thought it would be a good idea to get sailing again and convinced the ASKO team from 14 years ago to reunite in a 16 foot skiff.”

“We have an old boat with lots of work to do but are having fun so far.  We can get to the top mark OK but are a bit wobbly downhill still.”

“We will do the Nationals at Manly for their 100th year celebration so that will be a huge event.”

“Hopefully we won’t embarrass ourselves too much.”