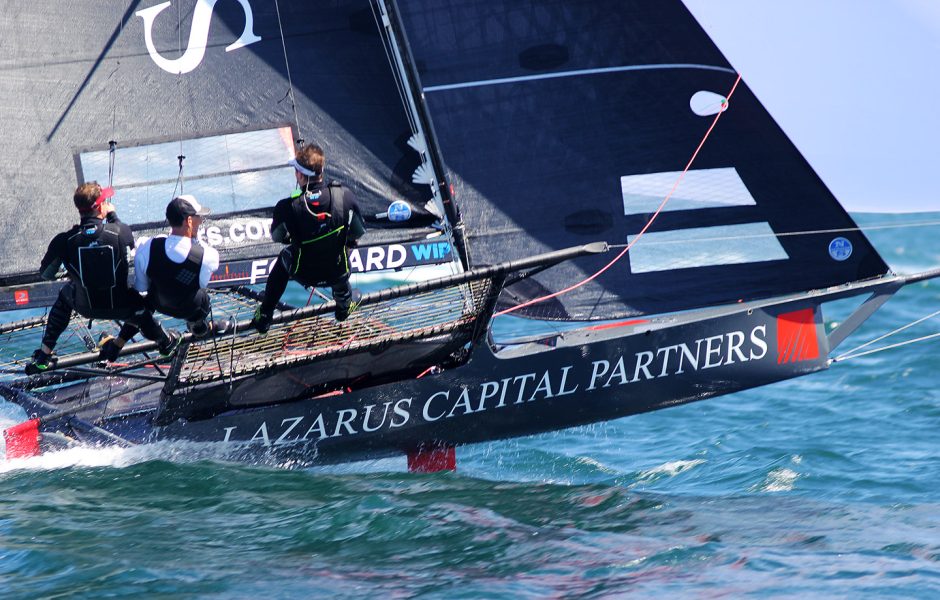 Although the Andoo team of John Winning Jr, Seve Jarvin and Sam Newton have already secured a victory in the 2022-23 NSW 18ft Skiff Championship, Sunday’s final race of the championship still holds tremendous importance for all the leading teams as they prepare for the upcoming Australian and JJ Giltinan Championship on Sydney Harbour.

The Australian Championship will be sailed over three days (January 27, 28, 29) with a ‘warm up’ day, on January 26, being staged as part of the Australia Day Regatta.

The nine-race JJ Giltinan World Championship will be staged from March 4-12 and will include entries from Europe and New Zealand as well as more from possibly three or four Australian states.

Andoo is definitely the benchmark for the rest of the fleet with consistently impressive form over the season to date, but if last Sunday is any indication, things are beginning to ‘hot up’ amongst her most likely challengers, who are beginning to edge closer to the NSW champion.

Keagan York’s brand new Van Munster-built Finport Finance hull was having its first race start and led the fleet easily over the first lap of the North East course before the team pulled off the course at the end of the first lap with “a couple of teething problems”.

Yandoo (John Winning) grabbed the lead soon after Finport Finance’s retirement and would have been level in the championship points table going into next Sunday’s final race had she been able to retain the lead over the final stages of the race.

An untimely, and definitely unlikely, capsize changed the fortunes and allowed Andoo to wrap up the series before this weekend.

It was the third consecutive race where Yandoo had led Andoo at various stages of the race and resulted in a good win in Race 3.

While the race to become national and world champion over the coming two months hots up, the race to win the coveted Australian 18 Footers League Season Point Score is even hotter with nine teams battling to put their names alongside some of the all-time greats of 18 footer history.

The Season Point Score is calculated on the performance of each team every week during the club’s season, and is based on the relative handicap of each boat after each race.

It represents the club’s most consistently good performer.

With so much hanging on Sunday’s race, for all teams, the racing should again be spectacular for the spectators, who can follow the action on board the club’s spectator ferry, as they have done for the past 87 years, which leaves Double Bay Wharf alongside the clubhouse at 2pm.

Booking online through the club’s website www.18footers.com is essential,

For anyone who can’t make it out onto the water, the League’s live broadcast team will be out on Sydney Harbour to capture all the action.  Live streaming is available at www.18footers.com by clicking on the ‘18 Footers TV’ link.

For all the club’s racing and up-to-date news:

For anyone who wants to take a look at Sail Media’s action videos from the 2021-22 season, including the 2022 JJ Giltinan Championship, go to www.18footers.com and click on the ‘18 Footers TV’ link.