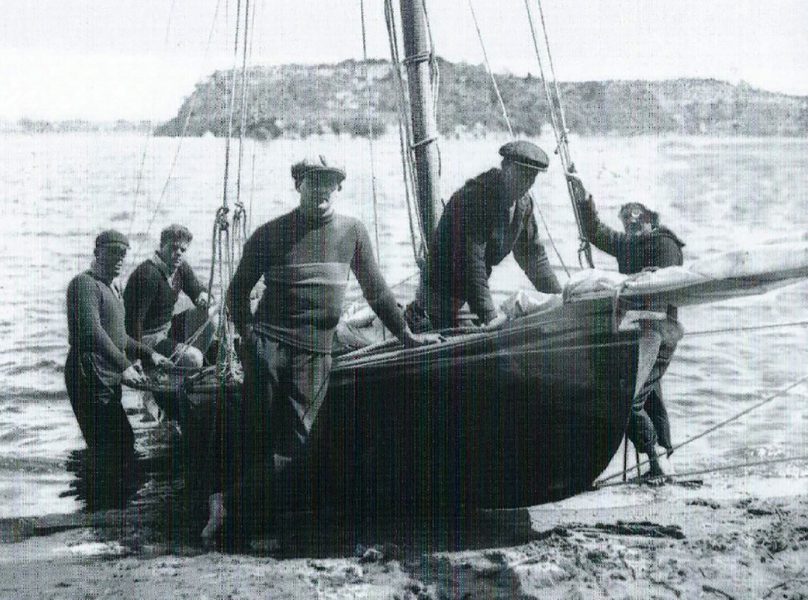 The Barnett family name and 18 footer racing in Australia goes back at least 110 years to the time when Sid Barnett (Snr) sailed as forward hand on Billy Dunn’s 1912-13 Australian champion Kismet.

The second generation of the Barnett family arrived in the 18s when Sid Barnett Jnr. graduated from the 12 footers in 1932-33.

A local syndicate had purchased HC Press III, which was originally built in 1925 and discarded by her skipper, Chris Webb, when it didn’t live up to expectations.  The syndicate renamed it Argo, re-rigged it, and selected the young Sid Barnett Jnr. to be the skipper, with his uncle Prince Barnett as forward hand.

In January 1933 they won the NSW State Championship, beating Chris Webb, the skipper who had rejected the boat, and backed it up with a win in the Bradleys Head Championship a month later.

Next, Sid steered Cutty Sark for part of the 1934-35 season, with his father as forward hand.

In January 1935, the new NSW 18-footer Sailing League split from the Sydney Flying Squadron and Sid joined the League and skippered the old Scot for as number of races that season.

He was tipped to steer a new boat Lois in the 1935-36 season but contracted pneumonia before that season started and died suddenly at the age of 30, leaving a wife and several small children.

Two of Sid’s children were Don Barnett and Les Barnett, who followed in Sid’s footsteps and had stellar careers in 18-footers.

Sid was held in such high regard by sailing people for both his brilliance as a skipper and his personality, that the League held a testimonial race for the family and raised about 16,000 pounds (equivalent of $32,000), which was an incredible amount and enough to keep the children in clothing and school fees until they were teenagers.

Grand-father Sid ‘fathered’ the children as well, and from him, Don and Les Barnett learned the sailing skills which took them into the champion’s circle.

The Sid Barnett Memorial Cup was an event keenly contested by all those Sid had defeated during his short career and the same Sid Barnett Junior Memorial Trophy is still raced for each season at the League.

Ben Barnett, Sid’s brother, skippered Malvina at the 1939 World Championship in Auckland, New Zealand, and sailed both Flying Fish and Narrabeen Lakes at the SFS in the late 1930s.

Bill Barnett came onto the scene and won many championships in the 1940s.  He became a famous sailing identity who designed, built and raced world champion boats from 18ft skiffs to international 12 metre class yachts, which challenged for The America’s Cup.

After the 1951 world’s victory, defending champion, New Zealand’s Jack Logan remarked “Myra Too was in a class by herself.”

Barnett produced many champion boats from his Berry Bay boatshed and established an excellent reputation as a shipwright.  Historian John Stanley says “Bill was extremely talented and prominent in the diagonal, double skin method of construction” which led him to be highly sought after for a wide variety of different boats.

In the late 1960s, his career reached even greater heights when he was approached to build an international 12 metre class yacht, Dame Pattie, for Australia’s 1967 challenge for The America’s Cup.  Dame Pattie’s backer Sir Frank Packer was later prepared to fund another Cup challenger, Gretel II, in 1970 and Barnett was again chosen as the builder.

In 2012, Bill Barnett was awarded the Medal of the Order of Australia ‘for service to the boatbuilding industry, as a designer and craftsman, and to the sport of sailing’.

Bill Barnett’s cousins, Don and Les Barnett were the next to feature in their own right in the 18s.

Scheduling of dates for the 1954 Worlds in Auckland and the 1953-54 Australian Championship in Brisbane prevented Ajax from competing in Brisbane but in the 1954-55 nationals Ajax finished third when the regatta was sailed on Sydney Harbour.

During the 1950s, the World Championship was only sailed every two years so there was no contest in 1955.

During the summer of 1955-56, Don Barnett again did not contest the Australian Championship in Brisbane and, instead, won his third NSW 12ft skiff Championship in Ajax.  He did go to Brisbane with Ajax and finished third behind two local Queensland boats in the 1956 World Championship, which was sailed on Waterloo Bay.

The boat was an outstanding performer in club races at the League and kept winning regularly despite the ever-increasing handicaps she was forced to give the rest of the fleet.

The highlight of a long, distinguished career in the 18s for Don and Les Barnett came in 1967 when they narrowly, and dramatically won the World Championship with Associated Motor Club on Sydney Harbour.  It was the team’s consistency and good seamanship in very testing conditions which won a hard-fought regatta against former champions Bob Holmes and Len Heffernan.

Don Barnett was affectionately known as “bear”, so when his son Phil came into the 18s in the 1980s it wasn’t surprising that he got tagged as “cub’.

It wasn’t long before he was showing the same skill as the Barnetts who preceded him in the 18s, and he became sheet hand on the highly successful Chesty Bond skiffs, which were skippered by Trevor Barnabas.

The Chesty Bond team of Barnabas, Barnett and Adam South won the 1987 worlds in Perth and were joint-champions at the 1988 worlds in Sydney and also won the 1985-86 Australian Championship in Brisbane.

When Barnabas retired after the 1988 worlds, Phil Barnett joined Michael Walsh in the 1988-89 Prudential team, which won every race of the NSW, Australian and 1989 World Championships on Sydney Harbour.

With the experience he had accumulated over the years as part of the Chesty Bond and Prudential teams, plus his natural ability, it was obvious that Phil would become an 18 footer skipper at some point of his career in the 18s.

In the 1991-92 season he took his already wonderful record to another level when he skippered Xerox to victory in the Australian Championship.  His team also won the SFS Centenary regatta and the Grand Prix national circuit, with victories in Perth, Townsville and Hobart.

Unfortunately, with the split in the class at the time with strict rules relating to the hull design and other rig requirements, Xerox was unable to contest the JJ Giltinan world Championship.

Latest member of the Barnett family to join the 18 footers fleet is Phil’s son, Daniel Barnett, who first came into the 18s with Kirk Mitchell in 2018-19.

Daniel, Kirk and Andrew Stephenson are presently sailing together in the Australian 18 Footers League 2022-23 season fleet on the Birkenhead Point Marina skiff, and are placed seventh after the first three races of the NSW Championship.